This week is National EMS Week! To celebrate, we wanted to shed light on some of the amazing first responders throughout Berks County and surrounding areas, as well as the animals that keep them motivated to help save lives!

First, we have Sarah Galbraith, an EMT for Western Berks Ambulance Association whose favorite companion is her cool cat, Randy Savage! 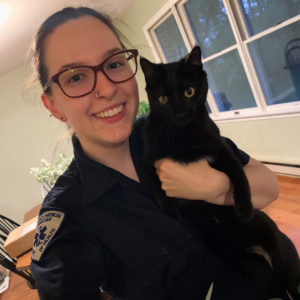 Next, we heard from Platoon Shift Supervisor for the City of Allentown, part-time Paramedic with the Wester Berks Ambulance Association, and dog dad to 3 amazing pups, Philip Banks! 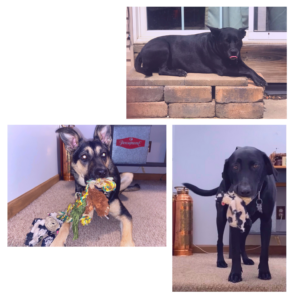 “Being part of the EMS life is harder than most can handle! You see people at perhaps the worst times in their lives — when they are extremely sick, injured, facing death, or even when they are at rock bottom. Most times the comfort you provide, besides the medicine and treatment, is all people need. When I come home from my shifts, it takes a while to unwind and clear my mind from everything that’s been encountered in my shift. I come home and before I can get the door open, my pups — Koda, Bella, and Hunter — are usually whining and crying because they can’t wait for me to come in!

As soon as the knob is turned, there are noses sticking out the crack of the door. After dinner and some playtime with the pups, it’s time for bed. They can never sleep close enough! They surround me and lay so close to me with their heads on my chest! The love and affection they provide, perhaps knowing the things I see during shifts, makes it so easy to drift off and sleep! It’s truly something I look forward to every day when I get home from work.”

“Skip is a purebred Golden Retriever, born in July 2016. I’ve had Skip since he was a puppy and have been his trained KPETS handler since he was one year old. His acquired specialty is being a first responder and crisis therapy dog. Below are a few of the activities with which Skip has been involved:

Skip does so much to bring joy to people in the community and I am so honored to be his dog mommy!”

Thank you to all of the first responders that put their life on the line in order to save ours! Your hard work and dedication do not go unnoticed and we’re so happy you have furry friends to help you get through the toughest of days! If you or anyone you know is in need of a companion as amazing as the few mentioned above, please visit us at https://humanepa.org/adoption/.

It was August 11th, 2016. I was scheduled as an Adoption Technician and was called up for an incoming dog. I walked into the front lobby and there she was — cold, wet, and shaking. The man who found her was holding her tightly in his arms. His wife walked me through how they stumbled across her that afternoon while they were walking out to their truck. They found her curled up underneath it in the parking lot. Unsure of what to do next, they decided to bring her to us. I thanked them for helping her as we slowly exchanged her from his arms to mine.

I carried her back to her new bedroom in our kennel, where she was greeted by several barking dogs. 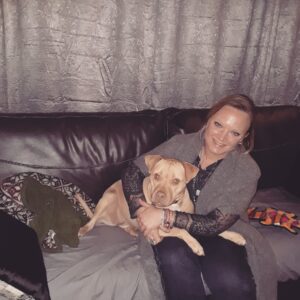 The louder it got the more she started to shake. I placed her on a big fluffy comforter, opened her cage door, and placed her information card in the slip on the front of her cage door. She sat up, looked in the direction of the door, and ran outside. I made it a point to walk past her kennel several times that day to see if she was acclimating okay. Each time I saw her curled up in the outside part of her run, I walked around and placed a blanket on that side to make sure she remained comfortable. “You don’t want to lay on the hard cement, Anastasia.” She stood up and walked as far away from me as she could.

Another week went by and we didn’t hear back from any rescues that we reached out to. All the while, I was working on gaining Anastasia’s trust. By the end of the second week, I was able to get Anastasia out of her kennel on her own without forcing her. This is when I realized she wouldn’t walk on a leash or cement but would run around as soon as she felt grass. I worked on her leash walking, with the assistance of hot dogs, and carried her from one grassy area to another. She came to me whenever she heard my voice and started following me everywhere. Shortly after, the Director of Shelter Operations asked me if I’d be interested in doing an adoption write-up on Anastasia. She told me that it was decided that they were going to place Anastasia up for a special adoption. My heart sunk. Of course I wanted to help but the thought of not being around Anastasia was one I didn’t want to get used to.

At the time, I was still living with my family so I couldn’t just take her home. I talked them into being okay with Anastasia staying with us temporarily as a foster. This way I could see if she would fit in with the other family pets before I got my hopes up. Our Doberman, Ava Mae, wasn’t a fan of her at first. After all, she was the “baby” of the family and didn’t like to share much. Anastasia was oblivious to pretty much everything. As long as she was sitting next to me, on my lap, or playing in the yard, life was great! It reached a point where I decided we had to see if the relationship between the two dogs was going to work out or not. One morning before work, I removed both of their leashes in the backyard and hoped for the best. Within seconds, they started playing. I burst into tears — happy ones of course — as I saw Ava Mae appearing to guide Anastasia around the backyard. I looked at my mom and said “That’s it, she is staying.”

On September 12th, 2016, I signed the paperwork and made it official.

Anastasia had her 5th birthday this past March. She loves spending time with her new little human and enjoys scrambled eggs and deer bologna regularly (she upgraded from her love of hotdogs). Every now and then she will still run into furniture, trees, or humans when she’s overcome with excitement. Anastasia has come so far over the past four years and has taught me so much about life, unconditional love, and patience. She was brought into this shelter for me to meet her. Little did I know that I needed her just as much as she needed me.

Adopting a shelter pet is a life-changing experience. By adopting, you may not have the chance to go and handpick the perfect puppy from a litter. The animals may even come with “baggage” – but who doesn’t? The animals that come into our shelter, and any other shelter for that matter, are positively unforgettable and deserving of forever homes.

So, do it! Go out to your closest animal shelter and say “hello” to all of those happy tails and biscuit-making paws. Not sure of what you’re looking for? That’s okay! The shelter staff is happy to help walk you through the animals that are available. You might be surprised who you end up creating an unbelievable bond with and, I promise, you won’t regret it.