Just Like Wine, Pets Get Better Over Time! Don’t Let a Number Stop You from Finding Love

By: Leann Quire, Director of Shelter Operations for Humane Pennsylvania

Humane Pennsylvania loves seniors and that is why we are so excited to share that November is Adopt a Senior Pet Month! It is a sad reality that many senior pets find themselves in shelters every day. Our organization is extremely fortunate to be able to help rehome many seniors, but that doesn’t mean it is always an easy task to do. As we celebrate a very special month that brings extra attention to those senior pets who find themselves in shelters, we encourage you to consider adopting an older pet at your next trip to the shelter. You aren’t sold on why seniors are so great? Then let me continue…

Before I tell you of all the benefits you may have never realized are involved with adopting a senior pet it may be helpful to share a personal story to give you a better inside look.

On March 14th, 2015 a 19 year old, stunning, domestic longhair feline named Fluffy was brought into our Humane Society of Berks County shelter location. The owner stated they were moving and were not

allowed pets where they were going. Before we continue, let’s pause to talk about what I am sure many are currently thinking, “How can anyone surrender their 19 year old pet to a shelter? I could NEVER do that to my pet let alone a senior. They must not have cared about her or they would have figured out a way to keep their pet.” For those of you who were not thinking those things, good for you. Thank you for not casting judgement to someone whose story you know nothing about. For those who thought those exact same things, trust me, this does not make you a bad person. However, I think it is important to explain why I encourage you to adjust your thinking.

Yes, there are people who surrender and are not good pet owners. Those who should not have had a pet in the first place, but we try to acknowledge the fact that they at least made the decision to bring them to the shelter to get in the hands of the biggest animal lovers there are to provide an opportunity at a second chance for that animal.

But how do you know who is good and who is bad? You do not. Which is why I encourage you to withhold making judgements and statements regarding people you know nothing about. Instead, be a part of the solution in helping those animals that have found themselves, for whatever reason, in need of a place to call home.

I will admit that I fell in the category of judgement at first. Tears filled my eyes when I was informed we had a 19 year old cat surrendered. How could someone do this to such an old cat? But I forced myself to change the narrative and instead looked at the history which showed this owner had Fluffy for all 19 years. This cat, while old and not without medical issues, was still in decent shape and appeared content and comfortable. This means that the owner made sure that Fluffy was safe and had all the necessities she needed to be able to live NINTEEN long years! Whatever your thoughts are, to me that means that this owner loved Fluffy. I told myself that this woman must have been heartbroken to find herself forced to move somewhere where she couldn’t take Fluffy and how difficult that must have been. Maybe there was more to it, but we will never know except that she brought Fluffy to a place where there were many animal lovers ready and willing to take her in and give her the best chance at some more time.

Which takes us back to March 14th, 2015 when she entered the shelter. Our vet checked her out and found she was on the thin side, had dental disease, but there was no heart murmur heard and lungs sounded clear. It was decided that she was comfortable enough to put up for adoption and attempt to find a home. She went up for adoption and waited, and waited, and waited. After almost a month of seeing her, and falling in love with her every time I walked by her cage, I could no longer think about coming into the shelter and seeing that she passed away on her own, alone in the shelter, because of her old age and possibly some underlying condition we weren’t aware of. So after discussing what we would be taking on with my husband we made the decision to adopt her and on April 3rd, 2015 we did just that. 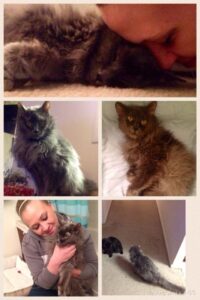 We decided that while she had the name of Fluffy for 19 years, a new chapter deserved a new name and after realizing she didn’t respond to Fluffy anyway, possibly from being hard of hearing, we gave her the new name of Cleocatra. Her name came from her stunning grey eyes, smoky colored long fur, and regal presence. She owned any room she was in. This queen joined our family existing of a small dog and two other cats. After a small acclimation period she quickly took charge. It was as if the other animals knew her age was significant to theirs and gave her the respect and hierarchy she deserved. She was the first to eat and when she wanted ear rubs, she was first in line to receive ear rubs.

We discovered in the first month of having her and conducting bloodwork that she had hyperthyroidism, which is a common disease that usually affects older cats. It meant her thyroid gland produced too many hormones and usually display symptoms in cats such as weight loss, increased appetite, thirst and urination, We were able to get Cleo regulated on medication to help with this disease. We saw improvements that appeared to make her more comfortable.

Over the months we quickly got to know Cleo’s personality, her likes and dislikes, and it felt like she had been there forever with us. In October she started to decline. Unfortunately hyperthyroidism affects almost all other organs and generally causes secondary problems. After follow-ups and discussions with our wonderful veterinarian team at the Humane Veterinary Hospital in Reading it was recommended that if she continued to decline we may be faced with the tough decision to euthanize or put her through stressful tests and surgeries that may not fix the overall problem(s). On October 29th, 2015 the extremely difficult decision was made to send Cleocatra off to a pain free state. I wept as I held her in my arms and the veterinarian sent her into a forever sleep with extreme care and compassion. Cleo left the world with dignity and surrounded by so much love.

My husband and I reflected on our time with Cleo and we both admitted that we knew when we made the decision to adopt Cleo that we could have days, weeks, months or years with her, but we could have never known how quickly and deeply we would fall in love with her. I remember saying to my husband that I loved her more than I thought I ever could and his response to me was, “maybe that means she loved us more than she thought she would.” And I hope that is true. I hope that we gave her a life of love, fun, comfort and snuggles…even if it was only in 7 short months.

And back to the owner. She could have taken her then Fluffy to the vet to be euthanized instead of bringing her to the shelter, but I believe she realized Fluffy wasn’t quite ready and hopefully there was more someone could give that she couldn’t. And boy, am I thankful to have known this special cat and be part of her life.

Love isn’t created over a specific amount of time. There is no rule to how long you must know someone to love them. There are people who fall in love at first sight and are together for their entire lives. Love is about the bond and experience you have with someone, not about how long that experience is together.

To me that is what I would want people to know when they see a senior animal seeking a home. Yes, you may have less time than you would if you were to adopt a younger animal, but that does not mean your time together will not result in sharing lots of memories, love, and lessons. Will the pain still occur when you do lose your companion, yes, but is it worth it to know that you gave them a proper send off and took great care of them in their final days, weeks, months or years…absolutely yes.

Benefits people may not consider when adopting older pets include:

At Humane Pennsylvania cats 11 years and older and dogs 8 years and older have discounted adoption fees to encourage people to take notice to them since they are often overlooked. However, this does not mean they will cost less in their care. During the counseling process for a senior pet our technicians will go over any existing health issues that will require ongoing care as well as what special health recommendations there may be for senior pets, such as visiting the vet every 6 months, instead of the recommended 12 months for a healthy younger pet.

If you have the room in your heart and means to take on a senior pet please don’t let their age get in the way. You may be missing out in an animal who can teach you the best lessons about companionship, life, and love. Cleocatra taught me that we all deserve to be cared for and loved for the entirety of our lives and when that love is given it is typically returned tenfold. If you can’t adopt a senior pet consider making a donation that will help go towards the medical care that is involved in caring for a senior pet in the shelter until they find their forever home.