Did I get you again?  It works every year.  Of course, as a 501c3 charity, Humane Pennsylvania does not and never has made endorsements in elections.  While there are political action and politically partisan animal welfare groups out there who legally can and do make endorsements, we are not one of those. I’m glad we aren’t.

Why?  Because we are here to help animals and the people who care about them.  As soon as we pick a side, any side, we lose the other side.  Instead of picking sides, we pick issues.  What policies and laws will best help animals, animal caretakers, and the organizations which work on their behalf?  That’s our focus exclusively when we wade into “political” discussions. 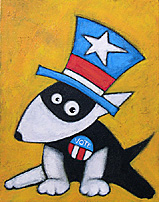 umane Pennsylvania knows that every elected official and every candidate is a potential ally on issues important to our work.  That’s why we engage with all of them, regardless of policy affiliation.  It turns out donkeys, elephants, and greens all have cats and dogs at home.  If ever there was a constituency that crosses party lines, it’s the animals who share our lives.  That’s why we have the support of elected officials of all stripes and parties.

Does that mean that it doesn’t matter who you vote for?  Of course not.  Heck, I’m as partisan as it comes – personally.  Professionally, my ultimate goal is to work to have any candidate of any persuasion to be right on the issues important to animals, and if it’s because they are a little afraid of voters, that’s OK.  It’s what I call the “furry third rail”.  If every candidate would all be as pro-animal welfare as they are pro-Grandma and apple pie, we could vote for whoever we wanted knowing that we’d only have healthcare, government spending, and our personal favorite number on the Bill of Rights to fight over.

Not many people are single issue voters so it’s not even reasonable to expect people to vote exclusively on animal issues.  Instead, we ask you press the candidates you support in your party to be good to animals and do things which makes the work of Humane Pennsylvania and our peers to be easier, not harder.  When we get two great animal welfare candidates running against each other, animals win – no matter which candidate wins.

For those who are interested in learning about the animal stance of candidates, all you need to do is Google “Animal Issues Endorsements” or something similar.  You’ll get more information than you ever wanted on endorsements based on cat and dog issues, farm animals, wildlife, or platypus conservation, whatever is important to you as a voter.

We share more than we don’t with one another, no matter how loud things get at election time.  One of them is a love for the animals that share our lives.  Go ahead and vote.  Then go hug your pet and remember that more people have a pet to hug than will ever vote for any politician.  It’ll make you feel better about the world, and about the idiot next door with the sign for the candidate you can’t stand.