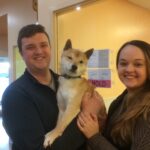 You may recall Doug, now Milo, a year old Shiba Inu, was found by a local police officer and brought to Humane Pennsylvania. He was in poor condition and suffering from an extreme case of mange. To give him the best chance at a full recovery, Milo was placed on an intensive treatment plan. After months of care he showed improvement and was cleared for adoption. Thankfully within a few days of becoming available, he was adopted.

Since finding his forever home, his family has discovered just how smart, curious, and lovable he is. He enjoys long walks around the neighborhood, playing hide and go seek around the house, and socializing with any new dog friends. He also really enjoys playing with toys – his favorite being his “foxy,” which his family believes he likes it because it looks like him. 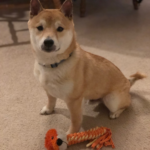 We are so grateful to the police officer who saved him from deplorable conditions and to Milo’s new family, for giving him a second chance at life. Visit our website to learn more about ways that you can help save pets like Milo.