It was on April 8, 2017 that Marshall, an emaciated American Pitbull Terrier, was brought into the Humane Society of Berks County. I can remember it was a typical day at the shelter – a few adoptions, a few surrenders – nothing out of the ordinary. Later that afternoon, a gentleman came into the shelter and stated that he had found a dog. The dog was in his car and he needed help getting him inside, since the dog did not have a leash or collar on to safely bring him into the lobby.

The team and I, quickly responded grabbing a few pieces of hot dogs (to earn trust and make friends with the dog), and a slip lead. I followed the man out to his car. As the car door opened, my jaw dropped. The dog was extremely skinny and was covered in ticks from head to toe. Due to the dog’s condition, he quickly took the pieces of food and I escorted him on the leash inside. 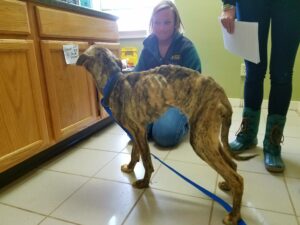 I remember taking the dog to a quiet room to keep an eye on him until our animal care technicians could take him for evaluation. As I began to process this situation, I knew he deserved a name immediately. Marshall was the first name that came to mind since he was found at Blue Marsh Lake. As one of our lead technicians came around the corner, we both looked at each other and began sobbing. Never in my life have I seen a dog in such poor condition. While we were all sad and frustrated by Marshall’s situation, we used it as motivation to begin providing him with the care he so desperately needed.

Marshall was put on a strict health recovery plan by the veterinarians at the Humane Veterinary Hospital – Reading. The staff provided Marshall with everything they could to ensure his best chance at a full recovery. This included removing all of the ticks, multiple baths, fluids, medications, and a nutrition regimen. Multiple times throughout the day, the team would hand feed him, and of course give him endless affection. Despite the lack of care Marshall received prior to being brought into the shelter, he did not let that hinder his love for people. He loved to give kisses, be pet and play – especially with tennis balls!

On May 5, 2017 Marshall was deemed healthy enough to be neutered and placed for adoption. Because this was not your typical adoption case, potential adopters filled out an application and interviews were conducted to ensure that Marshall found the best home possible. One day on the radio, Ashley and her husband heard about Marshall. They quickly inquired about him and sat down with our Director of Shelter Operations, Leann, for an interview. After learning more about him and having him meet with the whole family, we knew this family was a perfect match for Marshall.

It has now been over a year since Ashley and her family adopted Marshall. Ashley recently shared…

“Marshall is the most amazing, loving, loyal, gentle 70lb lap dog ever! He is the absolutely sweetest with both our young children. He has been such a pleasure to have and is especially playful with other dogs, he also loves to play with Div (when she lets him).

He listens so well and followed commands almost instantly after he joined our family. He loves to give kisses and loves to snuggle. We LOVE him and I just could not imagine our life without him.”

Our deepest gratitude to Ashley and her family for opening up their hearts and home to Marshall. It is tough cases like Marshalls’ that encourage the Humane Pennsylvania team to work hard each and every day for the animals in our shelters. 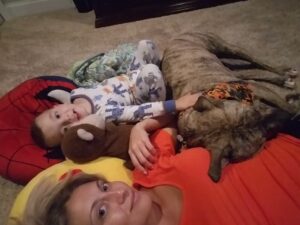 Marshall with his family, 2018

Marshall would not have made a full recovery without receiving critical care that was provided through the financial support of community members like you and the Miracle Maisy’s Medical Fund. This fund supports all life-saving services and emergency medical care for abandoned, abused and neglected animals in need.