The Miracle which is Maisy

When I was asked to write about a positive front desk experience, I truthfully didn’t even know where to begin. While I get to interact with several wonderful customers, most of the time in the shelter world it feels like we sometimes have to experience the bad before we get to see the good…which brings me to Miracle Maisy.

If you’re not familiar with Miracle Maisy, she was a 2 year old, spayed female cat discovered by two local sanitation workers during their route in Reading last April. As their trash truck ran, they stopped compressing the trash in the back of the truck when they heard an unusual animal-like sound. They dug through the trash until they found the source of the noise. A cry for help. A cat had been brutally abused, tied up, and discarded in the trashcan. She was inside a trash bag doused in gasoline. The two trash men acted very quickly in getting her into the Humane Society of Berks County shelter, which in turn gave her the best chance of survival. 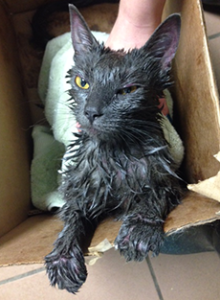 As someone who was still getting familiar with the animal welfare field, seeing a petite cat look up at me drenched in gasoline was an absolute shock. So many emotions where running through my head, and I knew we had to act quickly. Immediately after receiving as much information as possible from her rescuers, I booked her in and she was taken across the street to The Humane Veterinary Hospitals Reading for treatment.

After receiving round-the-clock care from our diligent veterinarian team, Maisy was finally stable enough to be placed in a foster home where she continued to improve. This was the first step in trying to find her a forever home. At the front desk, we received hundreds of phone calls and emails daily in regards to Maisy’s condition and if we knew when she would be available for adoption. People from all over the world were following her story.

After sorting through hundreds of adoption applications, we found the best home possible for Maisy. Maisy was adopted almost a month after she was brought to us for care. With any adoption, we always follow up and check in for updates. Within the first week pf being in her new home in we were relieved to learn how well Maisy was adjusting. This again was confirmation she was placed in the perfect environment.

Over a year later, the heroes who found Maisy, were recognized at the Local Red Cross Heroes Award breakfast. I was thrilled to attend the breakfast and awards ceremony, where they featured Maisy’s story and recognized the two gentleman who ultimately saved her life. This story impacted so many people and animal lovers around the world. It truly affected me on a personal level, not only because of the condition of Maisy when she was brought in, but because of my involvement throughout her time at the shelter. 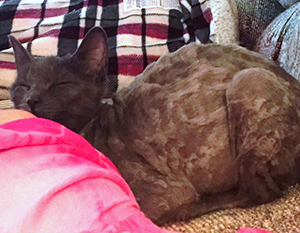 For more information on how Miracle Maisy is thriving and to donate to the Miracle Maisy Medial Fund, which supports all life-saving services and emergency medical care for abandoned, abused and neglected animals in need visit HumanaPA.org. 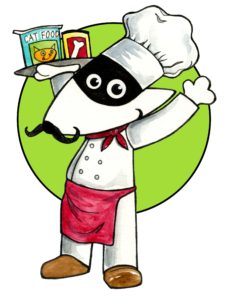 We are thrilled to announce that in partnership with Redner’s Markets and Purina, we are expanding our Ani-Meals Pet Food Program into the new and improved, Spike’s Pet Pantry.

As we continue to grow and differentiate our pet food pantry program, we have renamed the Ani-Meals Program to Spike’s Pet Pantry. This new nomenclature better defines the goal of the program which is to provide resources, specifically food, for pet owners in need of proper nutrition for their pets. The ultimate goal is to prevent pet surrender due to food insecurity or temporary hardship.

Thanks to the generosity of the teams at Redner’s Markets and Purina, in support of our mission to empower people in our communities to increase their capacity to care for animals so that all animals are healthy, safe, and treated humanely – throughout the months of June through December 2018, Redner’s Markets will be offering the opportunity for customers to easily donate to this life-saving program.

In seven Redner’s Markets throughout Reading, customers will find Spike’s Pet Pantry endcaps with simple tear-and-show donation slips in $1.00, $5.00, and $10.00 increments. Customers can grab a donation slip from the display and during check out, give that slip to the cashier. The donation slip total will then be added to their total bill and the funds will directly benefit Spike’s Pet Pantry recipients. Customers are also encouraged to use the hashtag #NoPetHungry and share their contributions and participation on social media throughout the six month campaign. 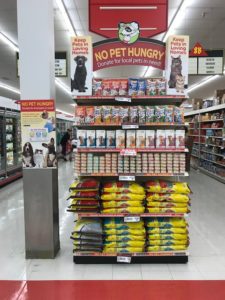 During the planning of this fundamental campaign, Meredith McGrath, Corporate Dietitian for Redner’s Markets, shared that her and her team were inspired to collaborate on this campaign because…

“Last year our friends at Purina approached us about doing some adoption events in our stores with the Humane Society of Berks County. After the four day event, we noticed what an impact it had on the community and we were all eager to take this mission to the next step to help more animals find and stay in loving homes.”

This program is in alignment with the mission of The Humane Society of Berks County to provide accessible resources for families facing temporary hardship. As opposed to families having to surrender their furry family member due to momentary difficulties, Spike’s Pet Pantry provides proper nutrition for pets to remain in their familiar and loving environments. Karl Minor, President and CEO of Humane Pennsylvania highlights the importance of this program within the community by stating…

“One of the main reasons why pets are surrendered is pet food insecurity. Sadly, animals die because families cannot fed their pets. The Spike’s Pet Pantry program helps ensure pets in our community are happy, healthy, and well-fed at home.”

The seven (7) participating Redner’s Market location are listed below…

For more information about this partnership and Spike’s Pet Pantry, please visit humanepa.org or contact Tawny Kissinger, Lifesaving Programs Coordinator, at tkissinger.humanepa@gmail.com or call The Humane Society of Berks County at 610-921-2348.

How to Potty Train Your Pup 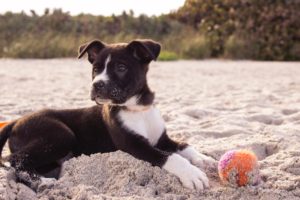 A frequent concern I hear from new pet owners with brand new puppies or a newly adopted adult dog regards house training. I wanted to give some tips for success that may work for your recent or next puppy or dog addition.

The first thing I think works great is positive reward. We can do this in two ways. One way is with our voice. Praise such as “Yay for potty” reinforces that is what you are looking for. The second way is with a food reward. Dogs need instant gratification. It is important that we are rewarding while the good behavior is happening. This means while your dog is urinating or defecating outside. Take treats with you. Giving a treat once your dog is back in the house reinforces that they should come inside, not go potty outside.

In order to give a treat and acknowledge good behavior we have to be right there with the dog. I recommend taking the dog or puppy on a leash and harness to the same part of the yard every time. And the same times of the day too. Tell them with your voice the goal of the trip outside: “Potty time”. Or get fancy and ring a bell attached to a string from the door knob. Over time your dog will understand that if they ring the bell with their nose that this is a signal to you they want to go outside.

Regular, consistent potty breaks outside every 2 hours initially at age 2 to 6 months, then every 4-6 hours once a puppy is 6 months, and then every 6-8 hours when over 9 months will help. If a situation arises that a dog or puppy needs to be left alone for longer than those time frames an alternative means for relief must be given. For instance, a potty patch (artificial turf on a plastic tray), puppy pads, or a dog walker can be used.

Don’t let your dog or puppy have the run of the house as the norm until they are reliably house trained. They need to be able to be seen for signs of needing to go outside. You may try a small area in a kitchen with a play pen, a crate, or keeping the leash and harness on in the house and having them follow you around. What you chose depends on the age and size of the dog. Look for those signs: A sniff of their rear end, sniffing and circling, acting anxious, looking at the door that goes outside.

In short, consistency from the family with positive reward is the best approach to house training success!